a short, angsty kinetic novel about making bad decisions and isolating yourself because of baseless insecurities.

thanks to the following peoples:

turned into a girl

It's impressive how people try to control what suicidal people say and how we say it, I remember Actual Sunlight having this kind of criticism, for example.
Anyway, I'm also trans, but AFAB, and I'm really glad you made this game. I hope things get better for you soon :)

I guess I missed the trigger warning, but still... I don't think this is okay. If it was one of possible endings, I could look past it, but putting the game out there as it is now just feels irresponsible. Particularly when suicide among trans people is this common, this topic should be approached with a lot of subtlety and care, here it felt both pointlessly disturbing and pretty much uncalled for considering the flow of the story. :/

Hi, thank you for playing my game and for your response. I would like to explain some things.

A little backstory - the month or so I spent making this was during one of the worst periods in my life in recent memory, and the game is (mostly) semi-autobiographical. Obviously I didn't kill myself, but I did selfishly isolate myself from my most trusted confidante and one of the people I love the most over things that she had no idea were troubling me and that she could mean no malice by. Making this game was mostly a way to get these thoughts and emotions out, and a way to force myself to be productive.

I guess the main problem with approaching a subject like this with subtlety and care is that there isn't much subtlety in it, at least there wasn't for me; there wasn't a tiny thought in the back of my head, but there was a very real and very viable way to not have to deal with my friends or my job or anything. Having it end abruptly the way it does despite everything leading up being seemingly harmless was very intentional; every time I felt okay and like reaching out to people again, things would end suddenly. There wasn't a gradual decline, but rather a sudden drop. There is a need for games that treat depression and suicide with more nuance, but that isn't a universal experience.

I realize there should have, at the very least, been a little more foreshadowing to the ending. I also realize that I shouldn't have made this a submission to Yuri Game Jam. I've managed to make an entry every year despite what's been going on in my life, but the fact that me making this game and Yuri Game Jam going on happened at the same time wasn't enough to warrant entering it. This was something personal, at best for a very certain type of person going through a very certain experience, and should been released as such without a jam as a backing.

I understand that this is a sensitive subject, very much so, which is why I put content warnings - the fact that you missed them tells me I didn't do a good enough job in making sure people knew what they were getting into; I hope I've remedied this.
I'm definitely not going to say that making stuff about a self-insert character killing themselves is a good coping mechanism, because it isn't, but at the very least it allowed me to get what I was going through out in a creative (?) way, and tracing/scanning 600 frames of mediocre animation was time consuming and mindless enough to let me think about things constructively while needing enough attention that I couldn't draw myself too far into my own irrational thoughts.

Thank you for your input, and sorry for making you read an essay that admittedly comes off a lot more defensive than I intended; I just wanted to share my experiences and reasoning as to why this game is the way it is, and hope you understand.

Thank you for your response, I'm glad I was able to read it. I was probably overreacting a bit, but considering it's not happening to me very often, I think this game indeed needed to greet the reader with a massive content warning. I was also a bit confused remembering your old games which were often at least borderline-trolling – this gave me a few different layers of "not prepared" and "not sure what I'm looking at".

In a way, I think what you wrote here belongs in the game as author's notes. When you put out something that can influence people's emotional state to this degree, you probably want to make clear what you meant by it and that you found a way out of it. I know many people dislike putting themselves out there like that, and explaining your creative work sucks in general, but it can easily make the difference between the experience being plain disturbing and depressing, and it being ultimately hopeful. Despite what I wrote at first, telling a blunt story is not a sin by itself, but you need to offset that with an extra amount of care in how you package it. :) 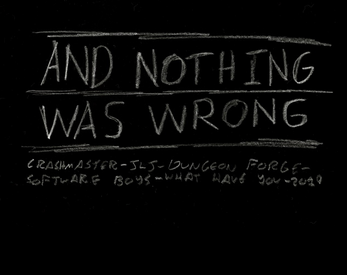